I was looking through my files today and I realized: I've written a lot of poetry! Much of that is serious stuff - about God, or about life. But there's a lot of lighter fare too; simple, fun poems that make me smile when I read them. The serious poems take me ages to write, and they don't come every day. Often, they don't turn out well. But for some reason, I can almost always write the fun stuff.

For instance, earlier this year, I went to a coffee shop for the sole purpose of writing serious poetry. As I sat there thinking, I decided a warm-up poem might be in order. Now, I didn't end up writing anything profound that evening, but the warm-up poem turned out pretty fun! Here it is:

This is the third and final installment of my interview with Ginny Owens on the intersection of art and faith. Click to read Part One or Part Two.

Most of your music is overtly Christian, but you’ve also released a few songs that are not. Do you write many of those?

I do. This past weekend I wrote a Country song with a couple other writers. I also have a song in a new movie about human trafficking. I'd even say that, while many of my songs are explicitly Christian if you are a Christian, listeners who don't share Christian beliefs might not hear them that way. In the future, I plan to release more of both.

Well, Saturday was The Gray Havens concert. It was wonderful. Dave and Licia are really lovely, and of course the music was phenomenal. We got to chat a little here and there, and they wanted to know about my own writing. This, naturally, resulted in further thoughts about how I really don't know what I'm doing or where I'm going as a writer. So when I was trying to decide what to post today, I started looking through the poetry folders on my computer. This one caught my eye.
Read more »
2 comments:
Email ThisBlogThis!Share to TwitterShare to FacebookShare to Pinterest
Labels: art, creative writing, faith, faithfulness, poem, Poetry

I am afflicted in my soul for the sins of the people.
I am disheartened in the house of the Lord –
in the very house of God they deny you
in affirmation of their own goodness
and justice and mercy and lovingkindness –
distorted mirrors, waving as they flex.
Read more »
No comments:
Email ThisBlogThis!Share to TwitterShare to FacebookShare to Pinterest
Labels: art, creative writing, faith, poem, Poetry

This Saturday, we're hosting The Gray Havens at our church.
It's free, so click the link to reserve a seat and join us!

Last year in September, Lake Bible Arts hosted its first ever special music concert. We brought Ginny Owens out, and she was fantastic, personally and professionally. It was a really wonderful evening, and everyone who went loved it. My pastor even motioned for me to come sit next to him midway through the concert and asked, “Are they leading worship tomorrow?” At my affirmative response he said “Good” rather emphatically. I knew then that the concert was a success.

A few months went by, and I decided I’d better start looking into setting up a concert for this year. There was no guarantee we would do another one, but I’d never dreamed we would do the first one, so I figured I’d poke around and see what happened. That’s how I found The Gray Havens. 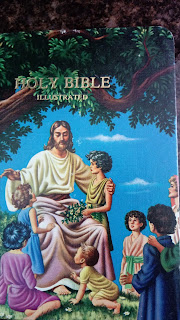 
A lot of the micro-plays I've written are a little abstract. That might not be the right word... I think non-realism might be more correct. At any rate, such is the case with the third in my series of seven plays in seven days.* (You can read my first effort here.) In class, I definitely felt more comfortable with non-realism, so imagine my surprise when the first full-length, 2-act, 90-minute play I wrote was pretty much realism!

Anyway, here's a non-realism micro-play for your enjoyment:

I'm nearsighted enough that it's illegal for me to drive without my glasses. I can't make out the titles on my bookshelves from more than about a foot away.

At Christmas, though, I like to take the glasses off for a minute while looking at a decorated tree; the little light bulbs become indistinct rounds of fuzzy color, bleeding into the blurred mass of what used to be individual green needles. In a way, it’s far more beautiful than the crisp, clear image I see when I put my glasses back on; it has an air of magic. It’s the same with stars. With glasses, they appear to be the tiny pinpricks of light that they are, but if I take my glasses off, they appear bigger as each bit of light expands in blurriness.
Read more »
No comments:
Email ThisBlogThis!Share to TwitterShare to FacebookShare to Pinterest
Labels: art, creative writing, faith, poem, Poetry

This weekend a plurality of Christian artists are gathered together in Tennessee for an annual event known as “Hutchmoot.” Hosted by the folks at The Rabbit Room, with names inspired by Tolkien and Lewis, and the silhouette of a rabbit smoking a pipe for their logo, it all looks quite magical from the outside.

But it’s all moot (see what I did there?) if the ultimate aim isn’t to glorify God – to be a group of people of whom it can be said, “Then those who feared the Lord spoke with one another. The Lord paid attention and heard them, and a book of remembrance was written before him of those who feared the Lord and esteemed his name” (Malachi 3:16, ESV)

I discovered The Rabbit Room not that long ago, and I’ve never been to a Hutchmoot – I am a newbie and still an outsider. What I know of the artists involved encourages me to hope that this is exactly the kind of thing happening at this gathering. Regretably, I have been to events where this was not the case.

During the 2015-2016 school year, I took a series of dramatic writing classes. One of our exercises was to write seven plays in seven days, in the spirit of Suzan-Lori Parks' 365 Days / 365 Plays.

I accepted the challenge, and wrote what I call a 'micro-play' every day for a week. This is the first:

Welcome to Part Two of my interview with Ginny Owens on the intersection of faith and art. Did you miss Part One? Read it here.

Usually, there’s some phrase of a lyric that will come with a melody. It helps to have a lyric with which to create your melody and you just put a lot of silly words in it, and then later you go back and spend hours, days, years reshaping the lyric to make it say what you want it to say, and sometimes that means there needs to be a little melody change. I usually start with a little bit of melody and a lyric, and when I write them down in my little idea book, they’re usually a concept, not an actual lyric.


Obviously, your faith informs your work. What are some of your daily habits with God?

In the morning I have about 45 minutes (it’s supposed to be 25 minutes, but once I get my coffee I start thinking about my day and get so unfocused; I have to kind of hang out with God until I can focus my brain). I try to do guided prayer time; I’ll write down things I want to thank God for, or things I want to praise Him for. I love Puritan prayers – I’ll pray through liturgical stuff just to get some new words.

It feels very King James; it rolls off the tongue with a hint of the exotic flavor of archaic language. Written as one word, it's quite memorable, and as a word person, I rather enjoy it.

But it wasn't until about a year ago that the word really started to mean something to me beyond the quaint combination of descriptor and noun. I started to see why it was written as a single word.

Interview with Ginny Owens - Part One

I am an unlikely Ginny Owens fan.

Mine was a classical music family; I didn’t know the difference between R&B and jazz, but I was certain I didn’t like them. So when I first heard Ginny perform back in 2005, two things immediately came to mind: 1) this sounds kind of jazzy, and 2) I kind of like it.

It was a bewildering experience.

I love good lyrics, and Ginny Owens’ are among the best. They drew me in and sustained me while my ears acclimated to her musical style.

Traditionally characterized by soul, jazz, and R&B influences, Ginny has always been versatile. With her newest album, she crosses into pop music, bringing those thoughtful lyrics with her.


Ginny crafts her words with great care, and it shows. In addition to writing songs, Ginny blogs on her website, co-wrote a book with Andrew Greer about the relevance of the Old Testament to our faith and lives, and recently released a 14-day devotional. In each case, her writing is not just good, but insightful.

Anyone who takes such pains in her craft is someone I wanted to speak with about my favorite subject: the intersection of faith and the arts. So I did! Here’s Part One of what she had to say:

For folks who don’t know, how did you get into songwriting?

I started songwriting at age seven or eight – probably because God knew it would take me a long, long time to become decent at it. But I was fervent at first in not pursuing music. I liked writing songs, but I bristled at the stereotype that all blind people have to be musicians.