Evolution of a Poetry Book

I was going through a bunch of papers a while ago, and I realized that I still have all the printed materials that I used in the process of self-publishing my book.  I thought: Wow, that would be a great blog - I could post photos and explain the process from getting an idea and writing a first draft of a poem, all the way to published book!

So here it is (sorry about the photo quality...and color): 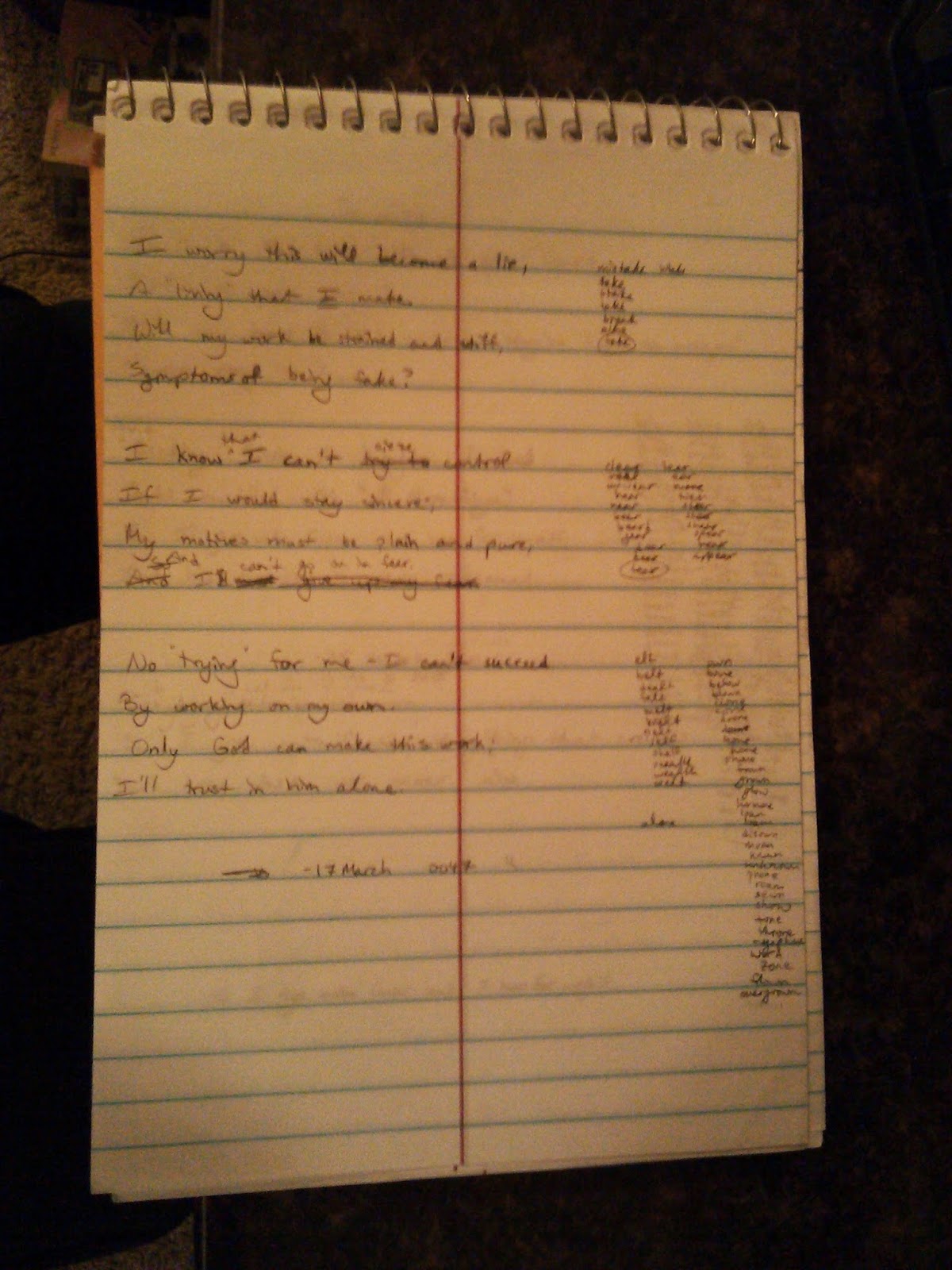 It all starts here. I think every single one of my poems has started out handwritten. I used to turn my nose up at poetry. (I know, right? Irony. Right there.) I was only interested in writing 'books', and I used 8 and a half by 11 spiral notebooks (college ruled). I discovered the joys of the smaller steno pads when I was deployed, and I now write my poetry just about exclusively in these highly portable, poem-sized notebooks.

You may notice all the rhyme notes. It's a strange thing to write rhyming poetry. You're balancing rhyme with content (hopefully with an emphasis on the content). But even if I'm writing a free verse poem, I still have various word choice options scribbled on the page, just not as many. Also, this is a pretty scribble-heavy draft - some of my rhyming poems find natural rhyme/content harmony and I hardly have to do any work to figure out what direction I want to go. I chose a messy one to post here for your entertainment.* 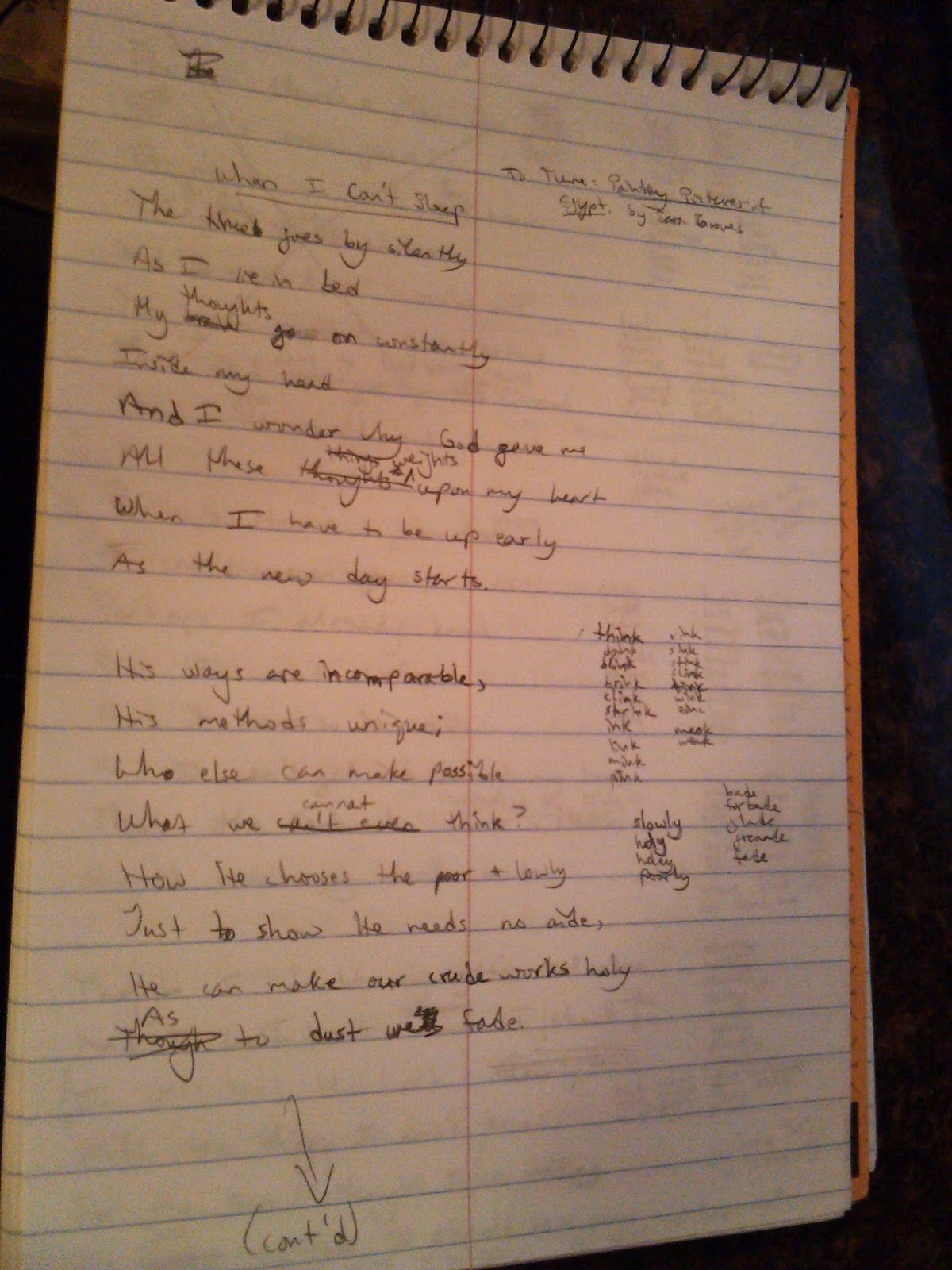 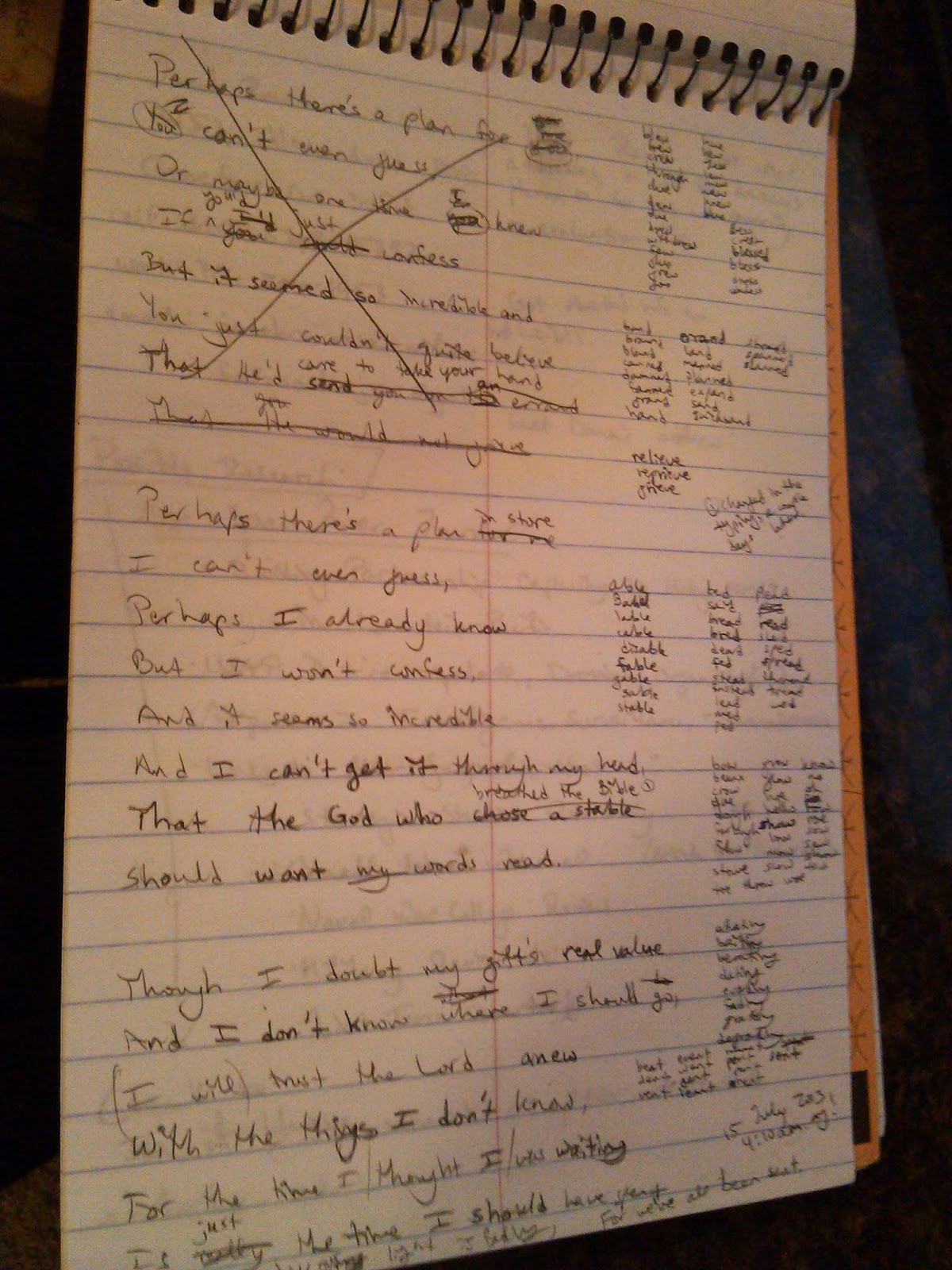 Once I've finished a handwritten poem, the next step is to type it up! I usually do light edits as I type, so you'll notice a few differences from the original draft (in this case, I actually went and changed the original to match a change I made while typing it!). Sometimes I'll go back to it later (much later) and make some additional edits, but you can't see the progression because I save the updated poem over the previous typed version(s). 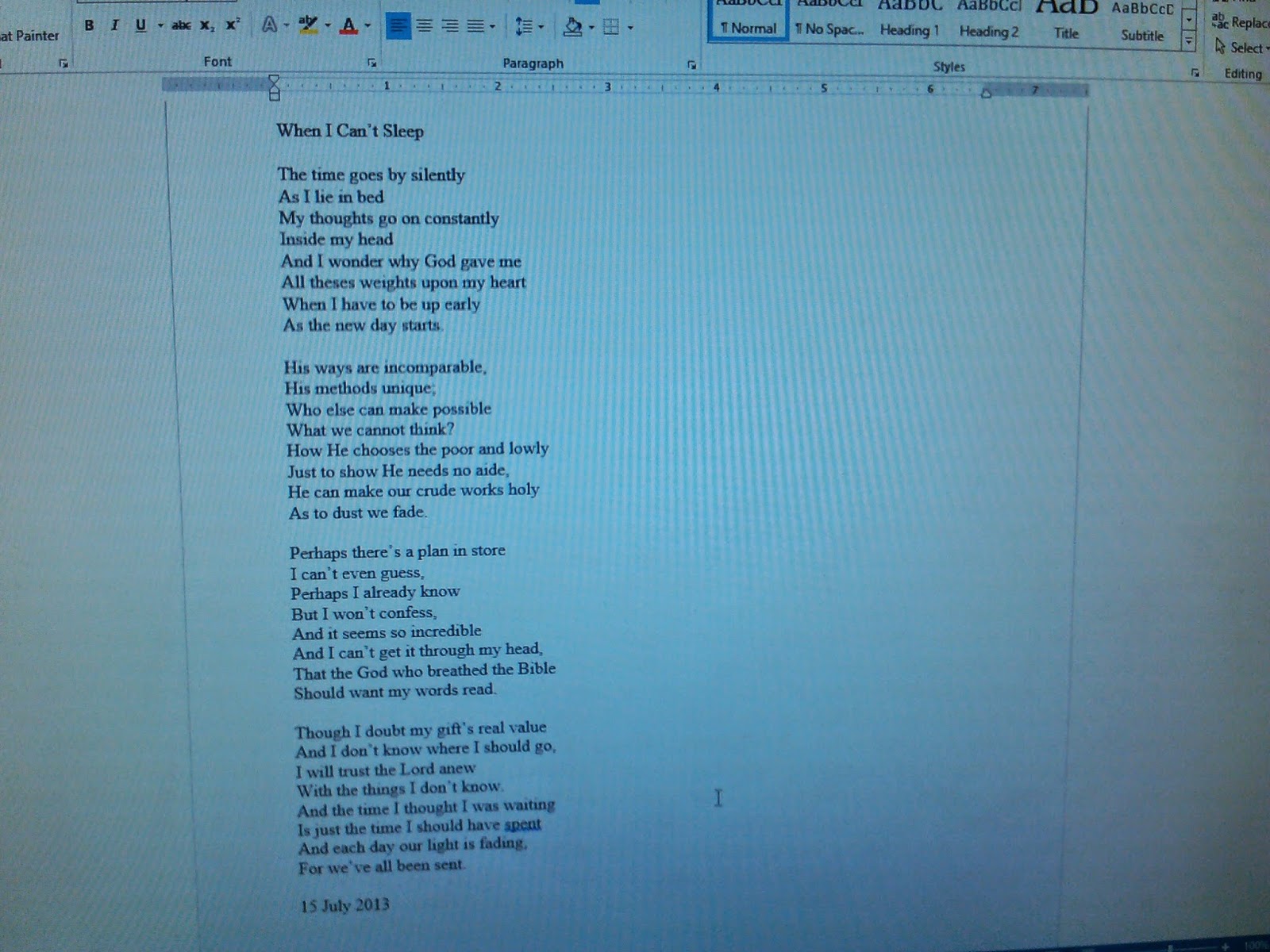 Once I decided to publish, the first thing I had to do was decide what poems I wanted to include in the collection. I knew I wanted poems related to faith, but beyond that I had no idea what to include. So I printed out every single poem I'd ever written about God, four to a page, and cut them so I could see them all properly.

My first organizational step was to lay each and every poem out on my dining room table. They fit pretty much perfectly! I had over 100 poems there, including those two note cards that you see.** 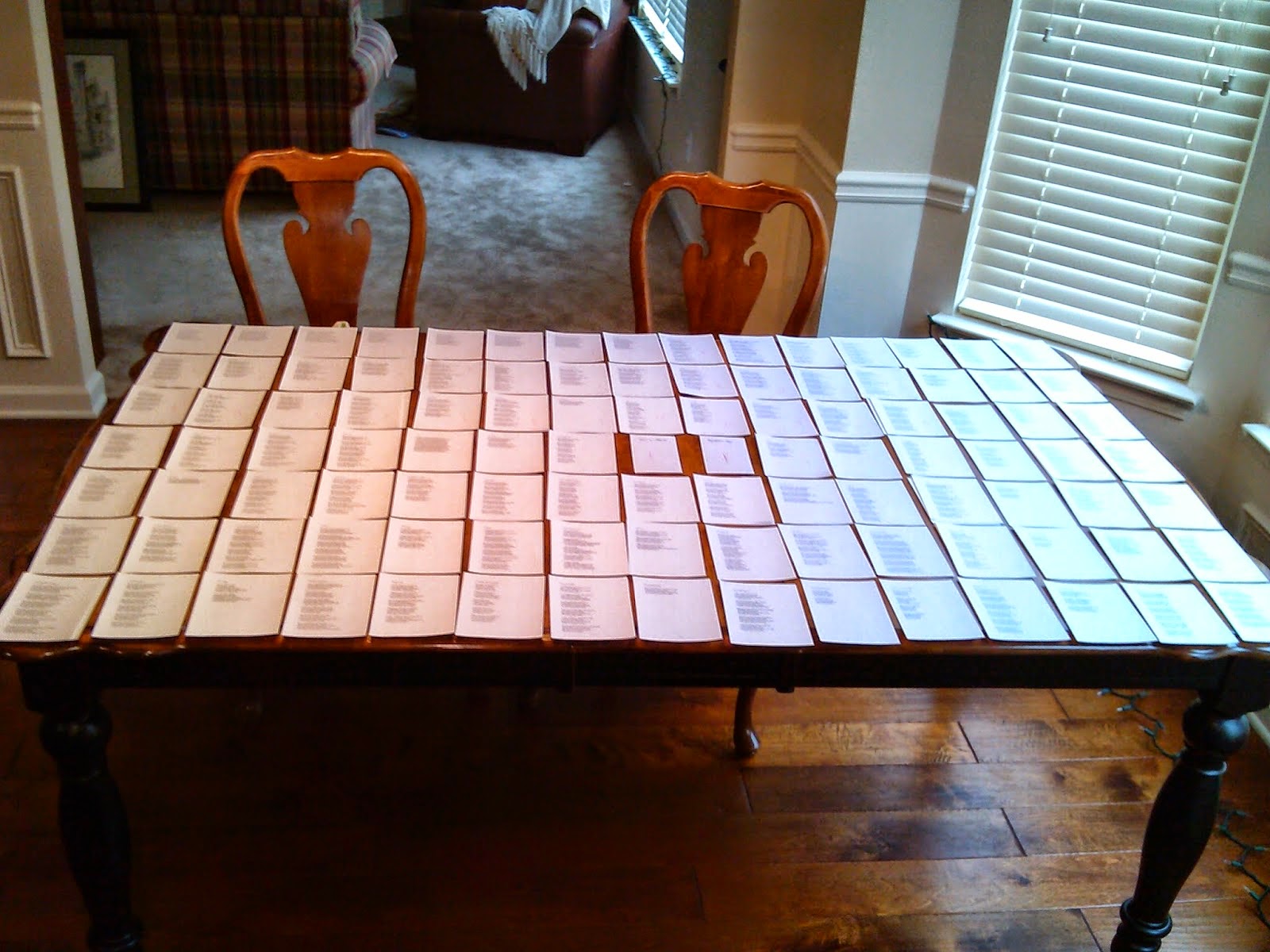 I initially rated my poems (in red colored pencil) with Roman numerals from one to five, based partly on content but primarily on quality. Poems rated one were pretty much shoe-ins to be included in the book, and wouldn't need much work. 5-rated poems either didn't seem to quite fit with the others for content, or would need some major re-writing to bring them up to publication quality (or both). As I continued in the selection, revision, and categorization process, the status of some poems changed, but for most, my initial rating rang true.  I went through the poems and made initial edits right on the page. 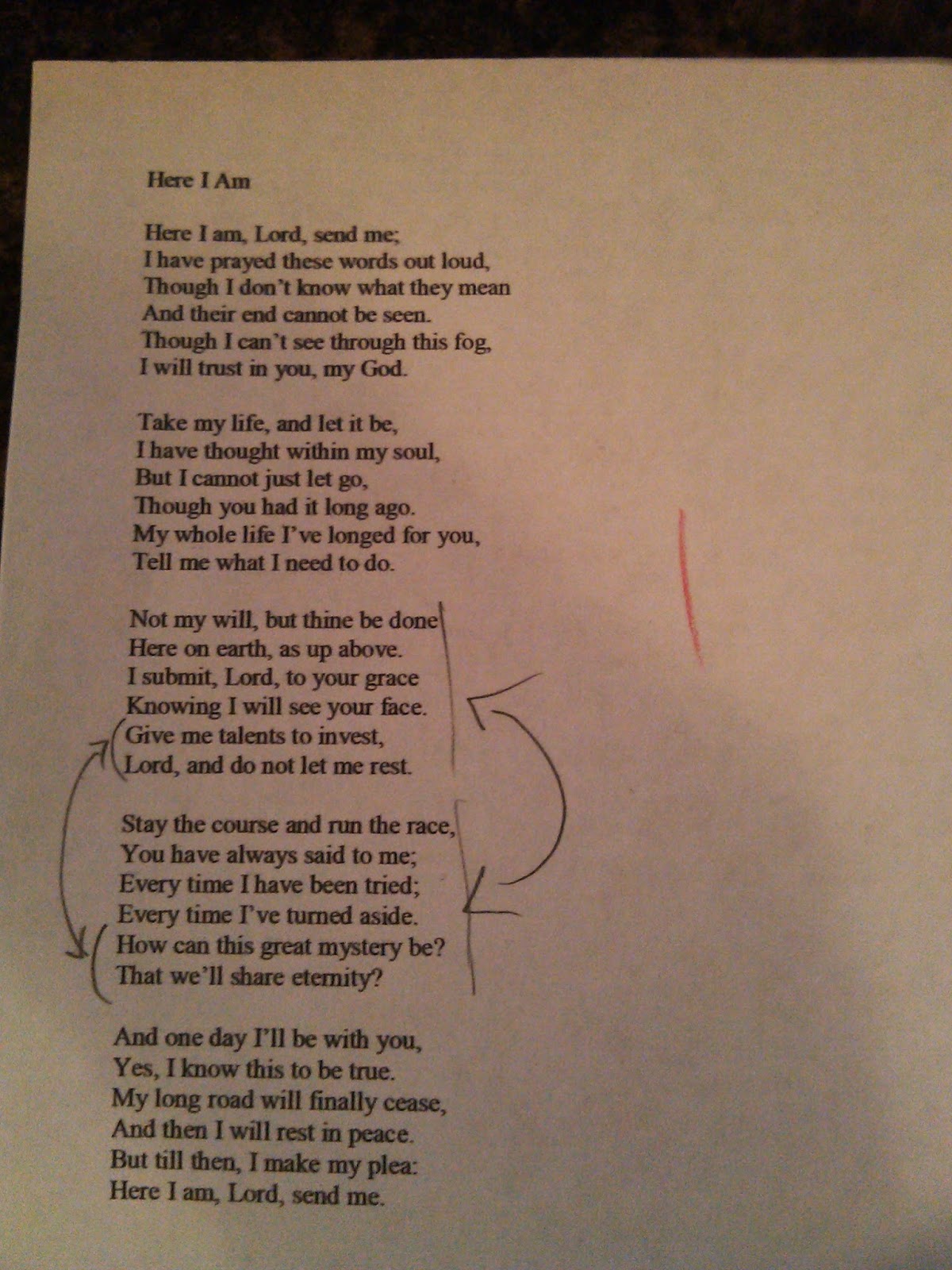 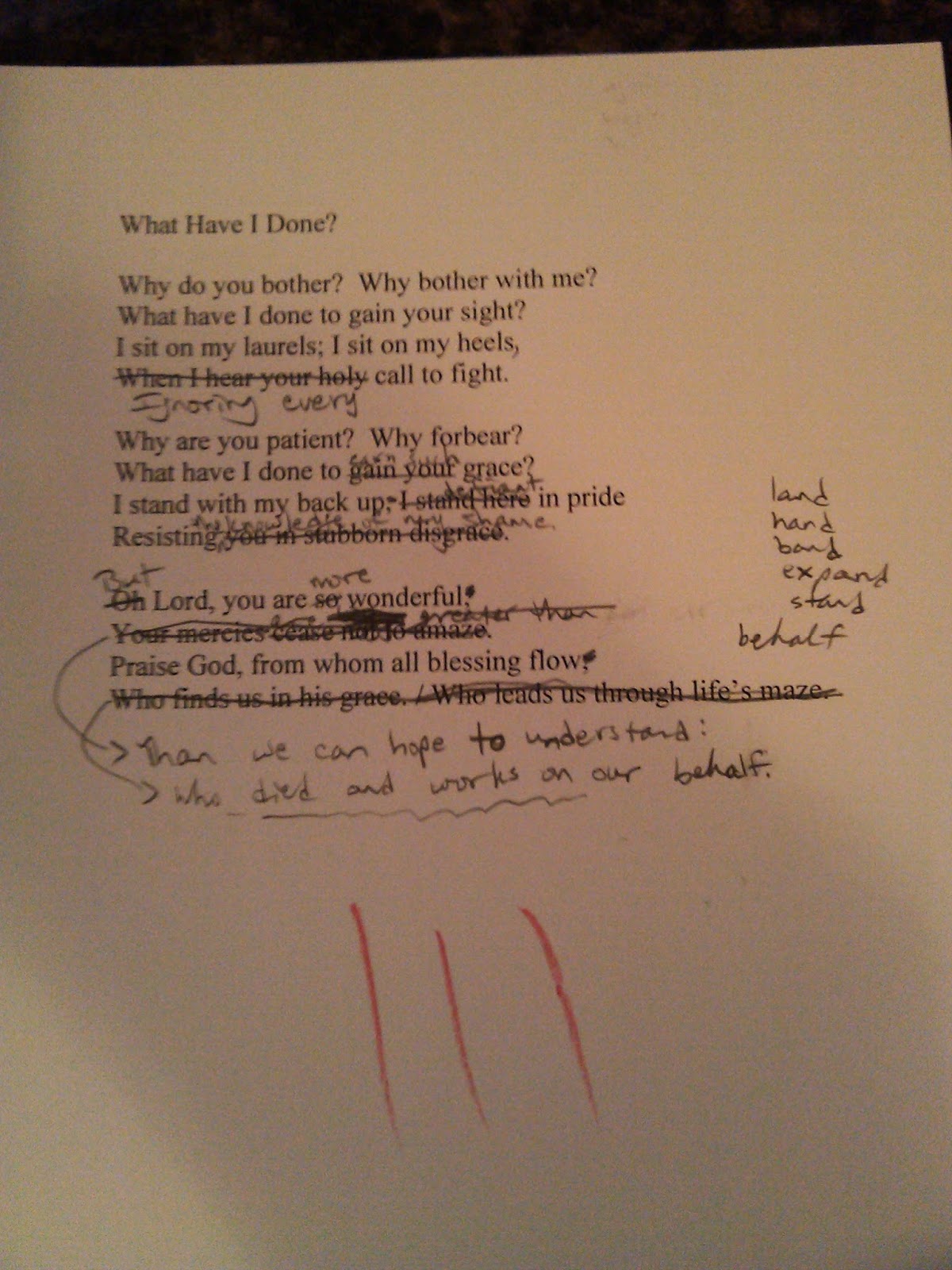 The categorization and revision processes were not one-time things. They were on-going from the moment I printed those poems four to a page, until I approved my manuscript proof for publication.


Having made my preliminary decisions about how to categorize the selected poems into sections (Prayers and Praises, Calling, etc), I put them into a downloaded template for the size book I wanted, and printed that off on full-sized pages to get a clearer picture of what that would actually look like. I think if I self-publish again, I may skip this step - I didn't do much with it.

Later, once I settled on my initial organization of poems within their categories, I printed the proof pdf again, and this time I cut away the excess paper so that I could see my poems in actual book size.  This was much more useful. 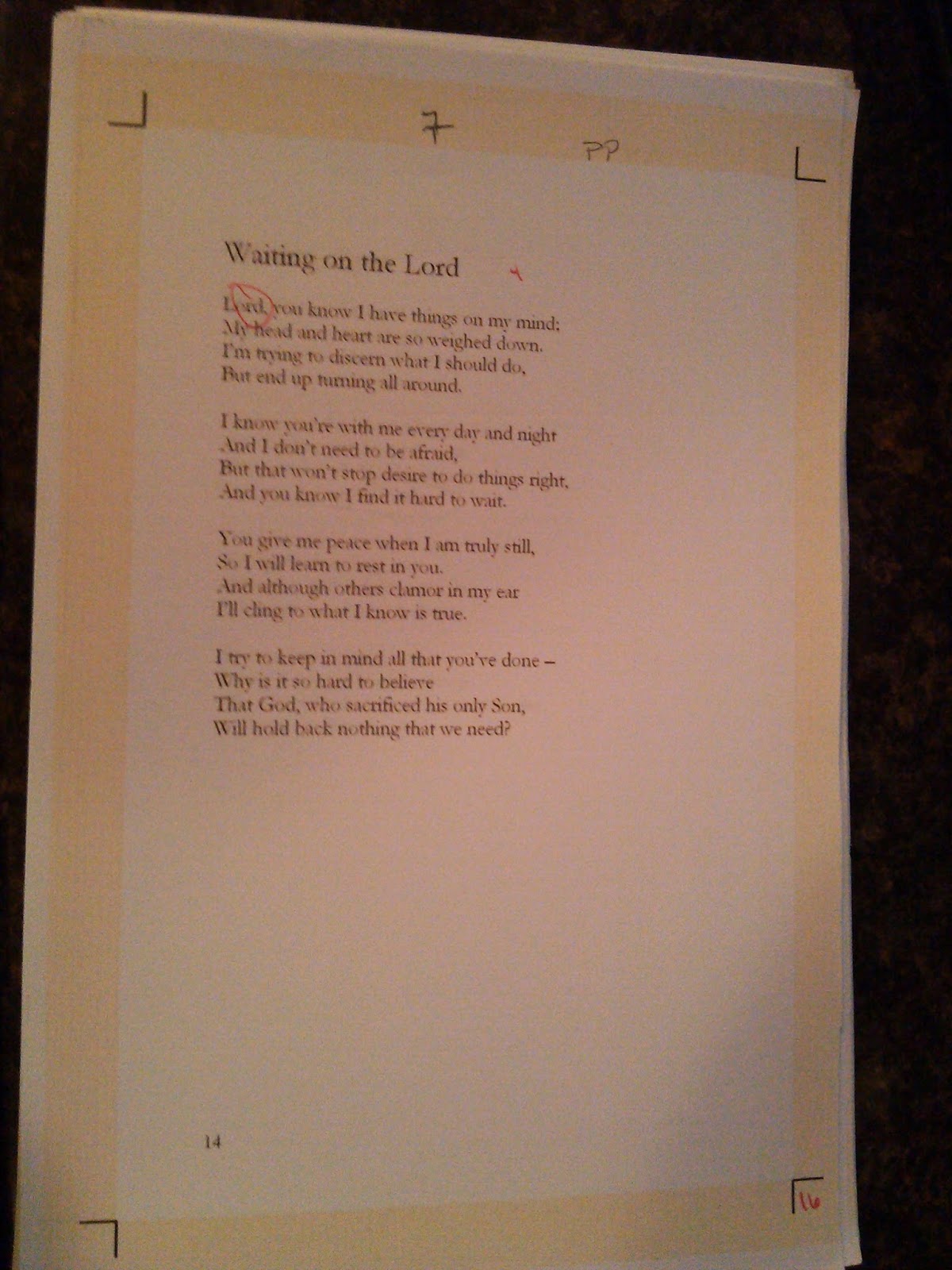 At the same time, I also ordered a hard-copy proof, with my place-holder cover design, and sent it to my brother Steven for his notes. 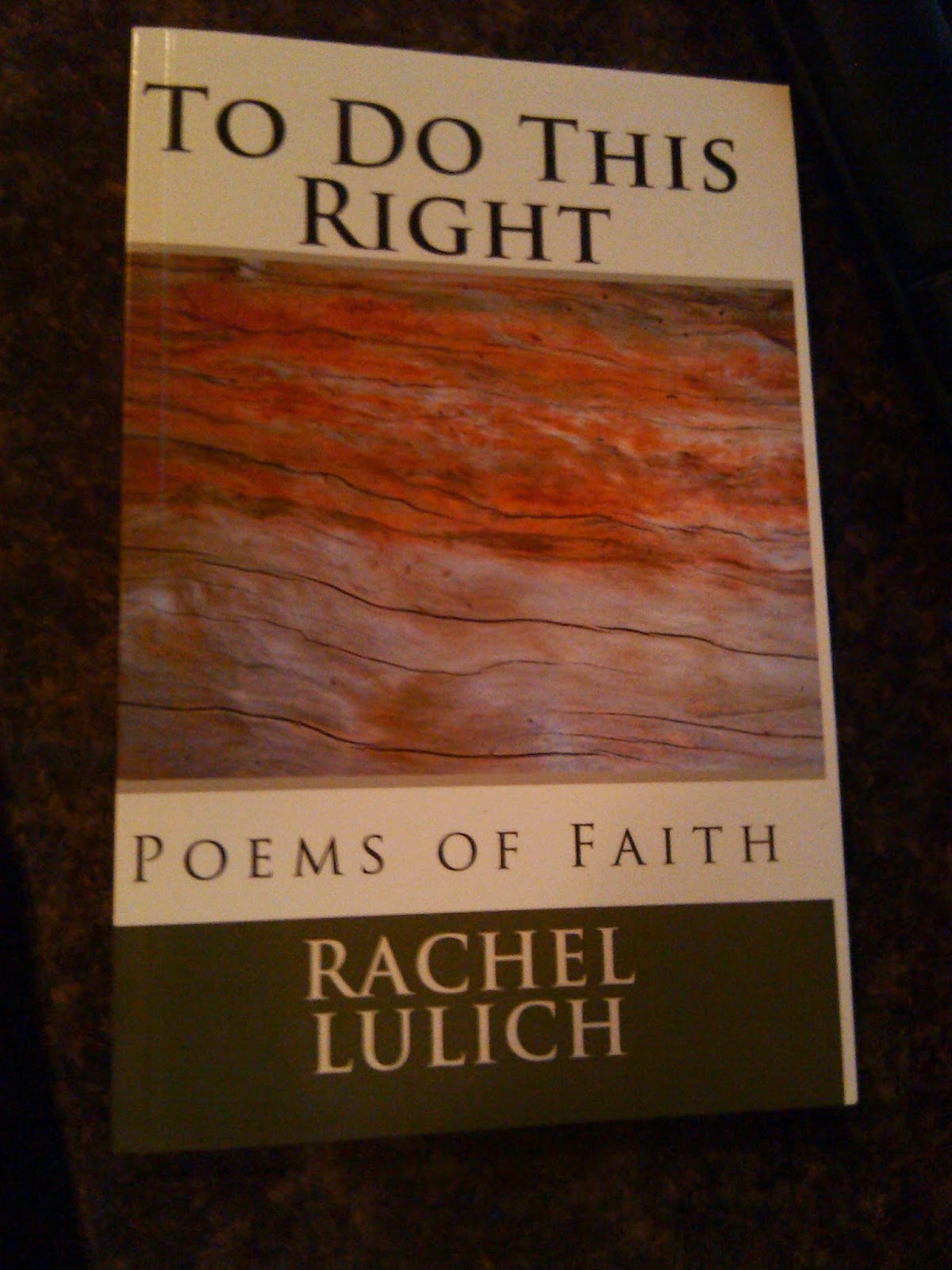 Thankfully, he typed them up in emails - can you read his handwriting? He's my brother and even I have trouble with it. 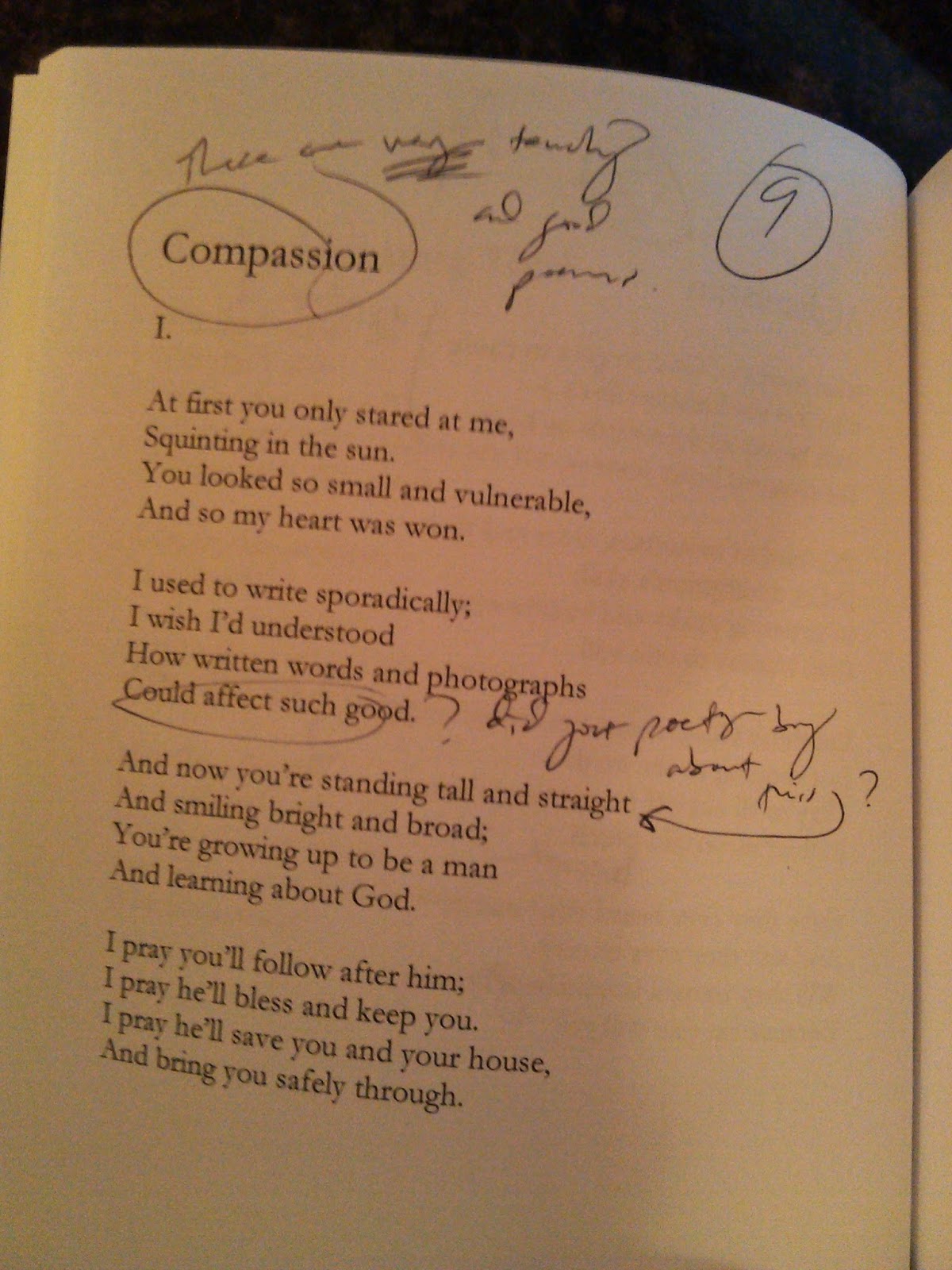 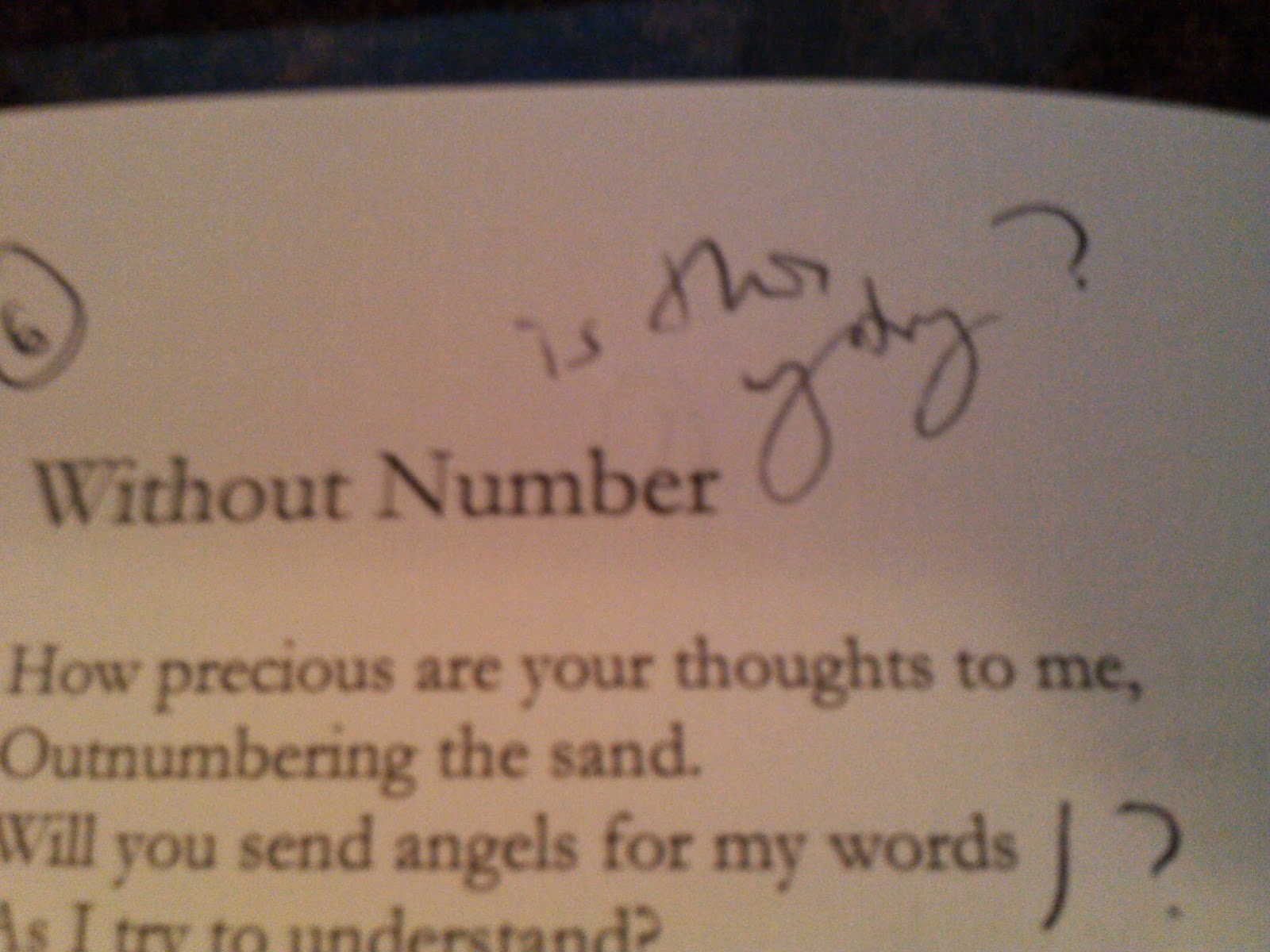 Armed with Steven's feedback, I made more edits-on-the-page, and reorganized these sheets more times than I would like to recall.


Once I was finally satisfied with the content, I turned my attention to cover design. I'd discussed it a lot with Steven when I was at his place in September, and he'd even shown me the basics of how to design my own cover (he's self-published a couple of books, himself). I even drew a sketch: 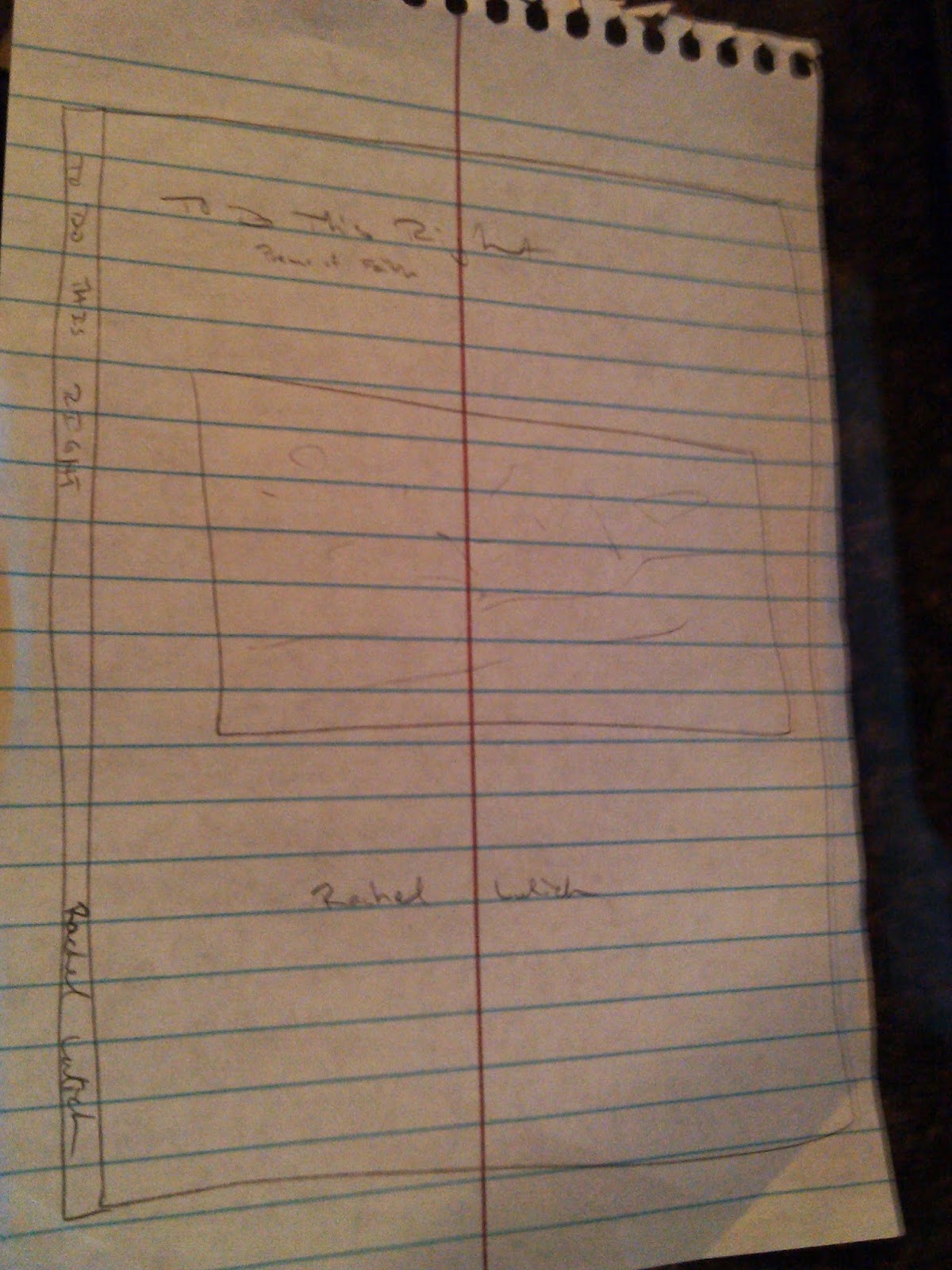 When I returned to that task in December, it didn't take long before I gave it up for lost. I am not a designer. Instead, I chose a template I liked, fiddled with the elements that I could change, and that was that. 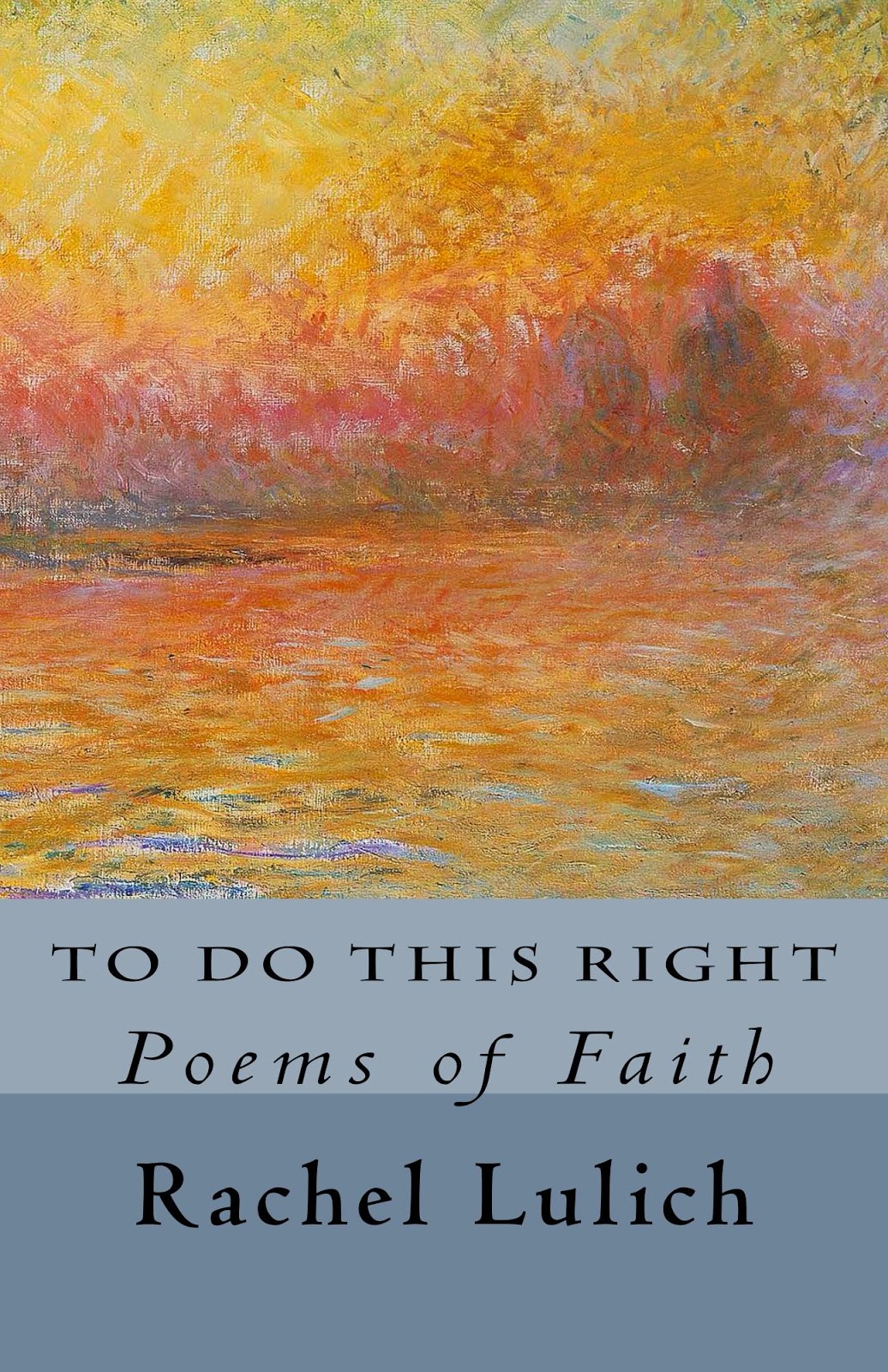 Or so I thought!  I became concerned that the copyright info on the cover art wasn't correct, and I couldn't figure out how to find out for sure, so I did an emergency switch just to be safe.  The final book uses a photograph my Mom took on our trip from Indiana to Oregon, when I was moving: 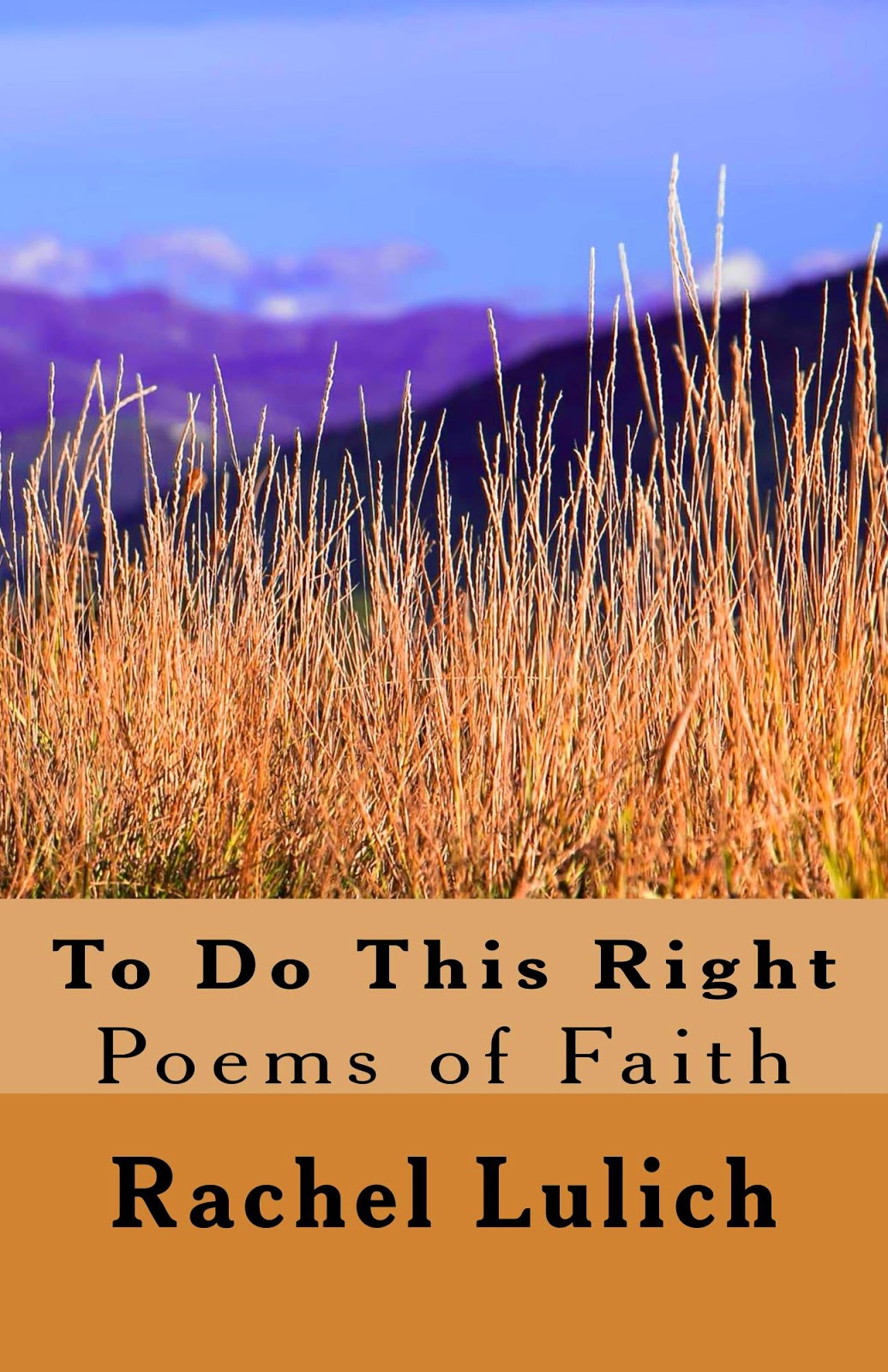 So there you have it! That's how I created this material book. Of course, I'm leaving out the creative process behind writing the initial poems and doing major edits, including all the reading and music that influences me, and all the praying I did about this project. But those are the mechanical steps I took in actually taking a poem from notebook to codex.  Now you can buy it here!  Or here!  Pretty amazing, really.


My main takeaways are as follows:

2. You really, really need to be as critical and objective with your work as possible if you're not hiring an editor - be ruthless.

3. Follow-through. Once you've published, a completely new type of work begins: selling your book. I'm still in the early stages of that one.

4. Publishing your book, even self-publishing, is extremely satisfying, especially if you've put in the work to make it as good as possible.

5. Take a course (or do research) on intellectual property law before publishing your book.


And the rest is (future) history.

*Sometimes I go back and do some edits on a finished first draft before I've even typed it.

**I had written those two poems after printing all the others out, so I just jotted the titles down on the cards. Being new, they were very fresh in my mind and I didn't need to see the complete poems to know whether they fit the collection or what quality they were.