Alright.  Rubs hands together.  Are you ready? 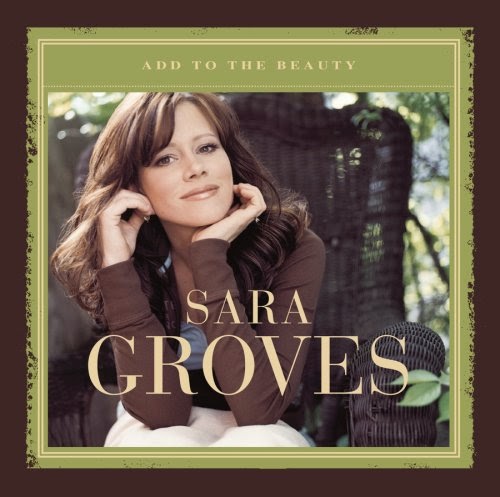 Introduction: Perhaps you've never heard of Sara Groves.  It's even possible that you've never heard her music, although if you listen to Christian radio or spend time in a Hobby Lobby, you'd probably recognize one or two of her songs.  She has eleven albums,* but they're not necessarily played on the air much - they're not the standard praise/worship/gospel fare. So what are they, then?


My Review: Yes.  Yes, I am a fan.  I have the T-shirt.  And yes, I think everyone should buy her CDs.  In fact, although I understand all things Art are according to taste, my personal opinion is that if you don't care for her music, you're probably not really listening to it.  Let's take a look, shall we?

1. The lyrics.  As I said, this stuff is poetry, and not like you think.  Being songs, there's a fair amount of rhyming, but it's not the obvious rhymes.  Groves makes extensive use of near, or slant, rhymes, so it never feels sing-song-y or predictable.  She also has a mercifully low instance of 'Christianese'.  And while some songs lean one direction more than another, her average lyric is clever, literary, and approachable.

2. The music.  I really like her music.  I find it very engaging, and she has quite a variety.  From uptempo, rock-ish songs like In the Girl There's a Room, to contemplative pieces like The Long Defeat, to the lighthearted Come Out and Play, you get a wide range of musical styles, some of them surprising.

3. The content.  Yeah.  I don't even know what to say about this one.  I mean, where do you start?  Ultimately, she's writing about life, as she experiences it.  Most songs are God-related, but she also writes about love, family, and friendship.  And her overtly religious songs aren't, in general, particularly simple.  Groves writes in layers, which happens to be my favorite poetic style; there's plenty there at a surface level, but listen to a song enough times and you start to discover just how deep it really is.  This is good stuff, I'm telling you.

1. The arrangements.  Personally, I like the mix on Groves' songs.  I think it suits the lyrics, giving them sufficient room to breathe, if you will.  It allows you to pay attention to the words.  That said, this isn't the sort of music you're likely to choose to keep you awake on a long drive.**  Also, some of the songs (mostly early ones) sound a bit 'thin'.  On the other hand, I tend to really like how the background vocals interact with the melody.

2. Ease of listening.  From my end, this is a positive, but whatever.  Groves has dozens of songs that I had to listen to several times to fully appreciate, and one or two in particular that I just didn't get at all for months.  This is a fine example of the poetic complexity of her songs, but one that some might find frustrating.  I think it's awesome, myself.

3. Her voice.  Alright.  Here's the deal: she's not Kristin Chenoweth or Idina Menzel.  She's not a 'powerhouse'.  Ergo, her voice may not impress you.  Again, I think this suits the music - it's not a distraction from the lyrics.  And while she may not be a Broadway contender, she does have a nice voice, and her style feels very genuine.  Interestingly, she has a few different realms that she sings in.  There are songs in which she sounds kind of like Ginny Owens, and others where I'm reminded of Amy Grant.  Most of the time, her sound is somewhere between the two.

2. Really?  You thought there'd be more than one?

My rating: 5 stars, and the only singer/songwriter I'd give that many.

*Past the Wishing, Conversations, All Right Here, The Other Side of Something, Station Wagon: Songs for Parents, Add to the Beauty, Tell Me What You Know, O Holy Night, Fireflies and Songs, Invisible Empires, The Collection (which has 4 new songs on it).

**I do, but I recognize that in this, I am perhaps not normal.