Why I Wrote The Confessing Church 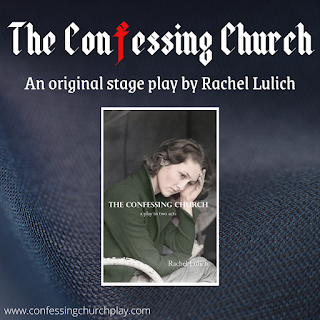 Next week rehearsals for my first ever full-length play, The Confessing Church, begin.* Is this real life??

Roughly a year and a half ago, I had the crazy idea that I might like to write a proper play. I'd written some short ones for a few dramatic writing classes and I loved it, but would I be able to write a longer work? After all, I write short poems and have trouble getting through longer prose works. What if I was only good at writing short things?

I enjoyed playwriting enough to give it a shot, so I petitioned my program director to allow me to take some extra electives in the form of a playwriting independent study with my dramatic writing professor, and he agreed.**

So in the fall of 2016, I embarked on my playwriting adventure.

That first term was spent reading plays and discussing them with my professor, through a writing lens. The second term was to be spent writing the first draft of a 2-act, 90-minute play, and the third term would consist of a workshop, in which acting students read the play each week, asked questions, and gave feedback, upon which I would base my revisions.

Things didn't quite go according to plan. Among other things, I was assigned to read some short plays by Bertolt Brecht from the collection, The Jewish Wife and Other Short Plays. I read "The Jewish Wife," "In Search of Justice," and "The Informer," and was absolutely fascinated by the picture Brecht painted of fear, paranoia, and self-preservation among ordinary people living in the Third Reich.

To make a long story short, I decided I wanted to write a historical play set in Nazi Germany and centered around the Confessing Church, which I had recently learned about. So instead of spending my second term writing a draft, I spent most of it doing research. I checked quite a few books out of the library, and ended up buying three that I found particularly useful:


I bought a couple other books, but these were the ones I read in their entirety.

Each book that I referenced gave me a good sense of how history unfolded, taught me something about the attitudes and thinking of individuals and organizations at the time (Christian and not), and provided me with a lot of information about the rhetoric used by the different parties.^ I also watched some Nazi propaganda footage, including most of Triumph of the Will, and excerpts from The Eternal Jew, Hitler's ultimate anti-Semitic work. These videos gave me a ton of additional information on the rhetoric of the day.^*

Since I spent most of Winter Term researching, I only had a few scenes drafted when the workshop component of the independent study began in the spring. As a result, the actors workshopping my play were doing so as I was still writing it; I think I wrote a brand new scene a couple days before the end-of-term staged reading. But I made it! I got the first draft finished just in time, and the reading happened on schedule with a complete play.


*For performance rights, visit WordCrafts Theatrical Press.
**Thankfully, I'd taken some of my core program classes as an undergrad, so even with the extra electives, I was finishing with at least as many program-specific courses as my fellow students.

^Hugely important for a play, which is something like 90% dialog.

^*They were also difficult to watch. Both films are surprisingly long. TOTW is rather ponderous, repetitive, and frankly dull; I fast-forwarded through a lot of it. TEJ is just... disturbing.