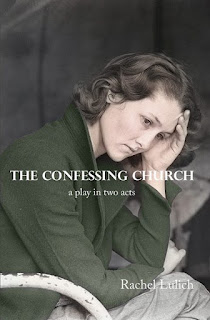 Monday night was the first rehearsal for my play, The Confessing Church. It was really fun to get everyone together and do a read-through of the script. I got home at around 10pm (I think...?), feeling very physically tired, mentally energized, and starving.

The following are some interesting facts about the play, in no particular order (numbered for visual clarity):


1. I'm very happy to say that this play has so far appealed to people of all kinds of different worldviews. Yay!

2. A couple months after I finished the draft, the Charlottesville rally was held, featuring, among others, the chant "Blood and Soil." I think normally I would have thought, 'Blood and soil?' What does that even mean? As it happens, I had used that very phrase twice in my play because it was a popular Nazi slogan - I knew exactly what it meant.

3. I wrote several possible opening scenes and random mid-play bits and pieces* before writing the "reenactment" that practically opens the final play. I had been struggling to figure out how to approach the history and put it into a sequence with characters. Once I'd written that scene, I had the writing style for the play.

4. A good chunk of the play was written on my bus commute between home and school. Some scenes were written on the way downtown and then typed up and printed off in PSU's Veteran's Resource Center before being taken to the day's workshop, often with only moments to spare.**

5. One of the many things I learned while researching the play but was not able to use, is the fact that a verse was added to the popular Christmas song, "Silent Night," about Hitler instead of God.^

6. If memory (and math!) serves, it took me around three months to write the complete draft, and another two to make revisions. I think I spent four months doing focused research beforehand, plus whatever reading I continued doing while writing the play.

7. Everything that happens in the play actually happened, in some form, to real people living in the Third Reich.

*None of which made it into the play.

**It was a busy final term of grad school, and I'm nothing if not good at writing under pressure, lol.

^There was a lot of Hitler-as-God rhetoric and behavior going on at the time. See Stroud's Preaching in Hitler's Shadow for details.
Note: If you are a theater company or church interested in producing The Confessing Church, visit WordCrafts Theatrical Press to request performance rights.