Beauty in the Desert

I feel uniquely qualified to write a post with this title. I spent my formative years living in the High Desert of Central Oregon, surrounded by pine and juniper trees, bitterbrush and sagebrush, yellow bunch grasses and gnarled lava rock. The color palette of my childhood was tan, muted green, and gray. The soil was dusty. The air was bone-dry.

The skies were perpetually blue. The freezing lakes and rivers were clear. And the isolated, glaciered peaks of dead and dormant volcanic mountains dominated the eye from every meadow. I loved the tiny, anemic-green leaves of the bitterbrush and the smell in the air produced by its equally small, pale yellow flowers in the spring. Orange, fallen pine needles crunched under foot in the summer; dry, white powder muted the world in winter. In the fall, a drive to the mountains might reveal the brilliant red of a lone deciduous bush farewelling its leaves against the black of an endless ancient lava flow.

There is beauty in the desert, not just in spite of its desertness, but because of it.

I belong to several artist groups, and multiple members in each group have expressed how their creativity has plummeted since mid-March – since the pandemic was declared. It's been a desert season for many, and while some of them have recovered, at least to some extent, some have not.

I can relate. From March 12th to early July, I got exactly zero work done on my ongoing creative projects. Dealing with the pandemic in isolation as an expat teacher in Slovakia, figuring out how to do school online, and working nights to stay on a Slovak time schedule after I came home in April, all sapped my mental energy.

I've since recovered, but how did I keep from getting discouraged during the desert time?

Metaphorically, I found the patch of fallen, brittle pine needles to crunch. I found the mountain views and the silent loveliness of the snow. I breathed deeply the parched, delicately fragrant air.

Literally, I found small, alternative ways to be creative. I wrote a few short, silly poems about pandemic life. I put together a one-page, single-issue, spoofy newsletter featuring a photo of me in my makeshift T-shirt mask. I recorded myself singing some hymns A Capella. I made unedited videos of myself taste-testing Slovak grocery-store snacks. 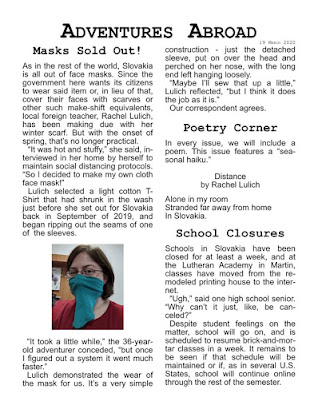 That’s it. That’s all I did. It was nothing fancy – not high art by any measure. It was nothing serious – nobody but a handful of people will ever see any of it. It was nothing sustained. But it was fun. It was creative. It made my friends back home smile. It felt worth doing, and I believe it was.

Sometimes the well of creativity runs dry, and all we can manage are anemic-green scrub brush creations and yellow bunch grass ideas. Sometimes we’re a blazing red bush losing our leaves alone against a barren backdrop of destruction.

But that, my friends, is beautiful.