Ah, the pleasure of writing longhand. Even the Tok'ra Anise kept a journal because her host Freya enjoyed the "tactile sensation of handwriting.* I used to write everything by hand, then type it up later. I remember in high school I wrote a middle grade fiction book, all in notebooks, double-spaced so I had space to add or change things if I needed to. Obviously, that used up a lot of paper and a lot of time. Later on, I went digital and did all my writing directly onto the computer (unless I wasn't near a computer). Except for poetry. For whatever reason, I still hand-write all my poems. 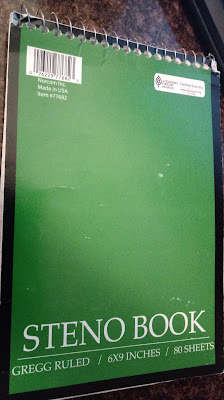 When I was in Afghanistan, I discovered the joys of the Steno pad. The supply shed we were allowed to help ourselves to always had them, and I used a few while I was over there. I don't remember what I used them for, but at some point I ended up writing a poem in one one of them, and I was hooked. From that moment on, almost every single one of my poems has begun as pencil scribbles on a steno pad.

Since I tend to write short, lyric poems, the steno pad has proven to be an ideal tool in terms of size. At 6x9 inches, it's wide enough to fit a whole line of poetry on a single line of paper (most of the time) with room left over for rhyme and content scribbles, and long enough to fit most of my poems on a page or two. It's also not so big that I feel like I'm wasting space, or should write more than one poem on a single page, which for some reason feels very wrong - like I'm blending different ideas that simply do not belong together. Am I particular? Not about brands, but yes, I do appreciate the size, shape, and binding of the steno pad.** 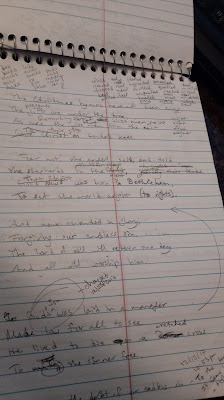 *Any fellow SG-1 fans out there?

**Unlike a journal, it's spiral bound, allowing the user to lay it flat, which I find much more conducive to writing creatively.