Art and the Gospel


The arts ministry at my church seems to move in lurches; prolonged periods of little to no activity or apparent interest in the ministry are punctuated by Grand Events, as I like to call them, that I never could’ve dreamed up on my own. Thus, after two or three false starts (planned events that almost nobody – or actually nobody - attended), we hosted Ginny Owens for a concert like it was no big deal. This was back in September of 2016.

Shortly after the concert, I sat down with Brian, my Staff Overlord, and John (another staff member who has been enthusiastic about the art ministry) to discuss how we might expand the ministry. I knew of a man in the church named Olando, who is a professional graphic designer and artist from China. I’d seen some of his paintings, and really enjoyed them, so we decided to approach him to see if he might be interested in creating a series of paintings based around the pastor’s sermon series at the time – the book of Hebrews. He graciously agreed.


John decided it would be a good idea to meet with Olando to talk through the themes of the book, and soon enough we had a painting based on Hebrews 2,* which we hung in the Narthex. 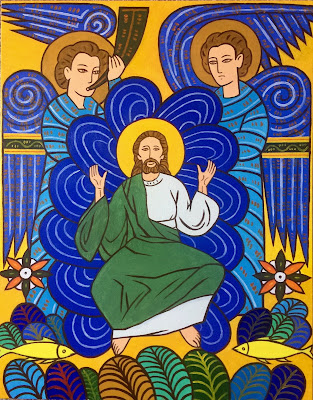 Olando was too busy to paint anything else during the Hebrews series, so we moved on to the next series: The Sermon on the Mount. When Olando had time again, he and John met to discuss the themes of the passage, and in December 2017, we got the new painting.** I didn’t find out until after the fact, but because of all the time Olando had spent studying the Word in preparation to create these paintings, he also began exploring various commentaries and videos in his native language, and in the course of his studies and preparations, Olando gave his life to Christ. His wife also accepted Christ, and they were baptized together two weeks ago. 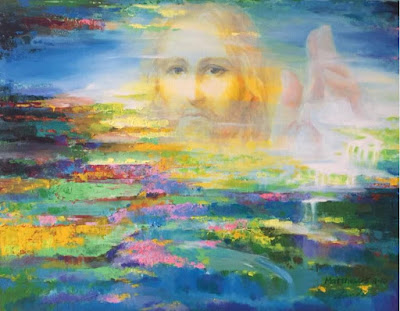 We never know what God will use in a person’s life to draw them to him. Learning that the arts ministry he led me to found had a part in someone’s salvation was amazing. In an email about it, Olando thanked me for encouraging his artistic enthusiasm toward God, and said he hopes he can glorify the Lord through his artistic expression. I had no idea God would use “my” little arts ministry in this way, and I will never look at these paintings without thinking about how incredible it was to be a tiny part of it all; they stand as monuments to God’s own creativity in bringing us to him.

*Symbolism in the 1st painting: We must pay more careful attention to what we have heard, so that we do not drift away.
1. The painting was stylistically influenced by the Beatus era, and depicts Jesus before the crucifixion; hence no scars on his hands.
2. Jesus looked like an ordinary man, and angels seemed to have more power than him, so he is painted a little smaller than the angels.
3. The patterns around Jesus represent people's ears, always focused on his words.
4. Pisces was an early symbol of Christianity that reminded people that Jesus came to save lives.
5. The Meter type flower reminds people that even if they were baptized, they still have to keep listening to Jesus' words.


**Symbolism in the 2nd painting: "The Beatitudes" (Matthew 5:3-10)
From the artist, Olando Lin:
This picture is the witness of God’s blessing to me. In November 2017, I
started this painting task, entitled "The Beatitudes". I searched and reflected
the true meaning of the Beatitudes over a week; the promise of God came into
my mind and deeply touched my heart. The promise of God is “Though your
sins be as scarlet, they shall be as white as snow; though they be red like crimson, they
shall be as wool. "(Isaiah 1: 18) "Moreover, I will give you a new heart and put a new
spirit within you… I will put My Spirit within you. "( Ezekiel 36: 26-27)

The words of God brought inspiration of the color layout of this painting.
The dark upper left corner symbolizes evil and sin that embedded in me. It
depicts that I, a sinner, accept his calling and implore his amnesty. I desire his
blood to cleanse my sin. The image of Jesus is very gracious in my mind; his
eyes grasp my heart. Jesus’s hand gesture brings heavenly blessings to the
Earth. He is so close to me as if He were not in heaven but on the Earth. His
kind greetings light up my path toward His destiny for me. The eight steps on
the left of the picture represents "the Beatitudes". His path guides us to reach
the ultimate blessings of life.

The words of God, "May he come down like rain upon the mown grass, Like
showers that water the earth." (Psalm 72: 6), inspire the creation of Jesus’s image
on the right of the picture: The blessings that flow out of Jesus’s mouth are
like the abundant spring of life. His Spirit comes upon me through His words,
and through Jesus I am born again, and I can enter the kingdom of God.

"The Beatitudes" is a greeting from Jesus Christ to not only those who believe,
but also to all mankind.