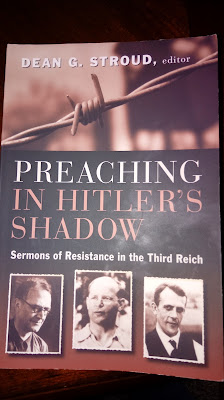 The introduction provides much-needed* context for the sermons that are to follow, building a picture of life in Nazi Germany. Much has been said in recent years about the failure of the church in Germany to take a strong enough stand against Hitler, especially with regards to the Holocaust. This book provides a look at those in church leadership who did oppose Hitler, and how they did it through their preaching.
The introduction is vital to understanding just how dangerous and radical a simple thing like preaching on the Old Testament was under Nazi rule, allowing the reader to understand why the preachers featured here clashed with the authorities, some being beaten and killed, simply in response to the things they said on Sunday morning.

In addition to the introduction, each sermon is preceded by a brief history of the pastor who gave it, and the context in which the particular sermon was preached. These, too, are enlightening. The sermons themselves are expertly translated, with explanatory footnotes inserted here and there.

The book ends with an appendix about the Loyalty Oath demanded of pastors, and the Confessing Church’s response to it.

My Review: This is one of the most informative and engaging books I have ever read in my entire life. The editor’s introduction is fascinating – did you know there was a verse added to “Silent Night,” featuring the god-like Chancellor? Did you know there was a movement called the “German Christians” who followed Hitler enthusiastically, tried to say that Jesus was Aryan, and heavily edited the New Testament to remove anything that sounded too Jewish? Did you know that pastors in the Confessing Church** were arrested, banished, forbidden from preaching, sent to concentration camps, beaten in the streets, just for preaching the Word (and sometimes directly denouncing the Nazis)? All this just scratches the surface of what’s contained in the introduction to the book and the individual sermons.

And then there are the sermons themselves. In a word: excellent.

Basically, I think absolutely everyone on earth should read this book. Certainly if you’re a Christian it would be especially well worth your time.

*And frankly fascinating.
**Perhaps you’ve never even heard of the Confessing Church!

A couple pictures for you. :)
Email ThisBlogThis!Share to TwitterShare to FacebookShare to Pinterest
Labels: book review, history, Wednesday review