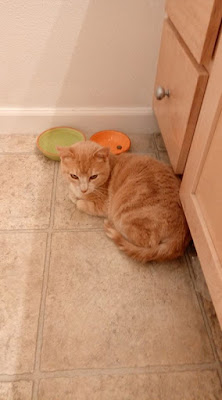 Hugo was found living rough as a stray. He's a shy guy, and was pretty scared at the Cat Adoption Team. When I first visited on March 30th, he wouldn't budge from his little hidey-hole they'd set up for him in his kennel, though he let me pet him, closed his eyes when I scratched his cheeks, and ate a couple of treats out of my hand. He was clearly very stressed, and that's not surprising. I was going out of town for the weekend, so I waited until I got back before adopting him.

I've been thinking about getting a cat pretty much ever since I moved back to Oregon, but the timing wasn't good at first - I was going to school, so my schedule changed every few months, plus I was working part time - I was out of the house a lot. For almost a year now, my schedule has been pretty regular, so I felt it was a good time to make the plunge. 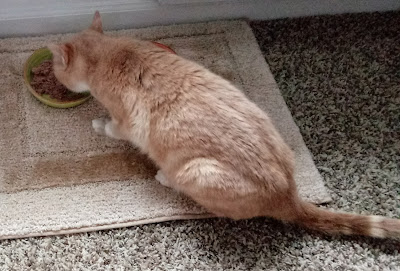 I wish I could take credit for the name, but it came with him. I think it's pretty awesome. He's still settling in, but here are a few things I've learned about him:

1. Hugo is not a picky eater. He's eaten every type of wet food I've given him, except the duck chunks in gravy, and he especially likes pate. He also likes treats, but not so much that he's not picky about the delivery system.

2. Hugo likes dangling toys. I got a want with feathers and a long feathery thingy hanging from the end, and he loves chasing that as I whip it around. My friend got him a mouse with gangly arms and legs. A thick string goes a few inches from the top of its head to a ring you can hold to dangle it and swish it around. The wand and the mouse are his favorite toys.

3. Hugo is pretty chill. He hadn't yet been here for 36 hours when he allowed a friend to show me how to clip his front toenails. He also let said friend groom him, with two different brushes. He's also already very used to the sound of me typing. 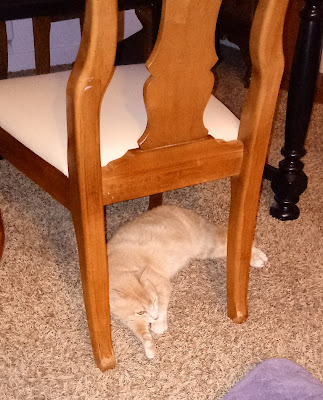 I now have a writer's cat.